Student artists created visual representations depicting a variety of topics, ranging from intersectional environmentalism, to issues of migration, to concepts culled from Dr. Martin Luther King Junior's speech "I Have a Dream".

Posted by Professor Nordell at 4:46 PM No comments: 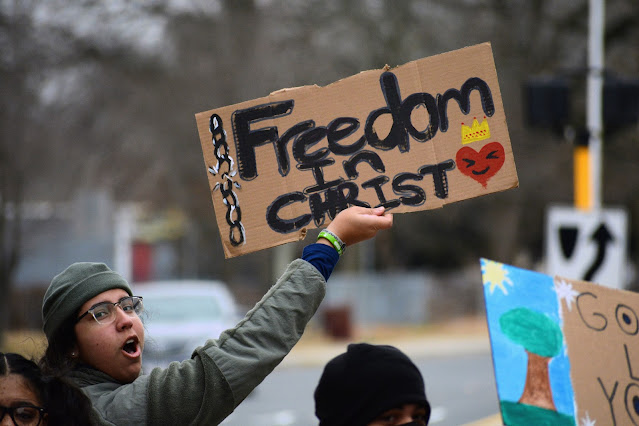 Alex describes the event as follows: This event was a long time in the making. This ministry as a whole was cancelled years ago and didn’t have plans of coming back. But God had different plans. We felt the move of God’s Spirit lead us into restarting this ministry to help those in need by giving them the message of hope. 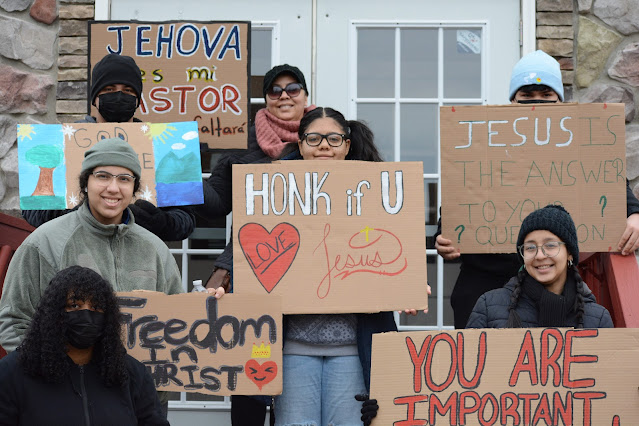 The whole event was a success. We prepared the night before and several different posters with bright colors to grab people’s attention. 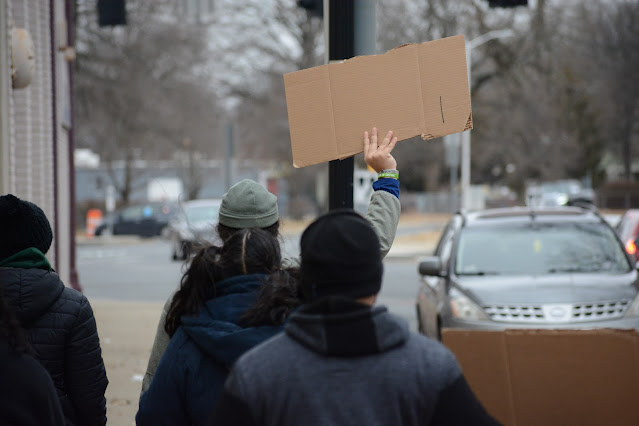 All of us were eager to get started and were full of the Spirit of God; motivated and excited to make people’s day much brighter. We walked down to an intersection on State St. and started spreading our message. 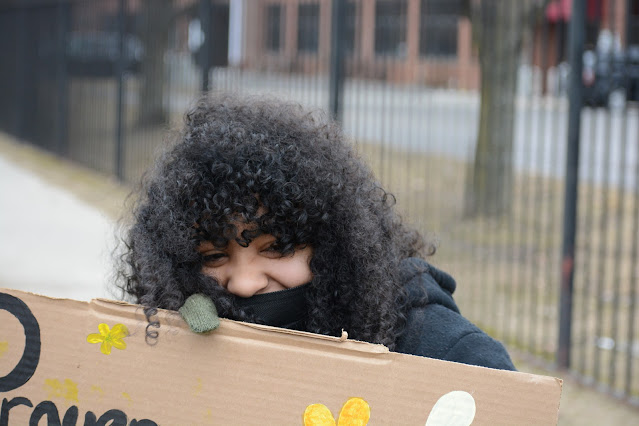 Though some laughed, many were thankful and were touched by our message. A man approached us and said, “Thank you, it helps a lot.” This is when we knew this is what God had in mind all along

Posted by Professor Nordell at 11:37 AM No comments:

Express Yourself Art Show at AIC: The Culture of Art

Art show opening reception 12/1/21 from 11:30 am to 12:30 pm. Location: West Wing Gallery of the Karen Sprague Cultural Arts Center, 1000 State Street, Springfield, MA Refreshments will be served.
The following curatorial statement was written by Jayden Renehan, an ART1000 History of Art student:
The West Wing Art Gallery at American International College showcases multiple pieces of student artwork that have multiple meanings. American International College is a very diverse college, so students need to be able to recognize different cultures and the importance of each culture’s history. Students produced many images based on the “I Have a Dream” speech by Martin Luther King to further create more expression and interpretation into the culture. Another set of art is the Migration artwork done by students, who shared their feelings and definitions about migration and how it affects people’s lives. Art is made to express feelings and emotions about certain subjects. The art presented in the West Wing Gallery aims to educate and create more of a diverse community within American International College.
Posted by Professor Nordell at 3:11 PM No comments:

Professor Nordell assigns students to create a visual representations that portray The World I Want to See: As we have been discussing in class, art impacts society and society impacts art. We have discussed whether the role of artists is to create art that is simply beautiful, or should also have meaning, that art should illuminate various issues in the world. In this spirit, think about what images you would like to see. Imagine what you would like the world to look like. For you, what is The World I Want to See?

"My name is Isaiah Darden and I made my World I to See Assignment called Echovision (Envisiano).  I also created a story on the character to invent a new world and a new word. I wrote this story to give an explanation on the meaning of my drawing and the lore itself.  I added the gif and music to give a theme and to match the feeling and the sense of a different world view." 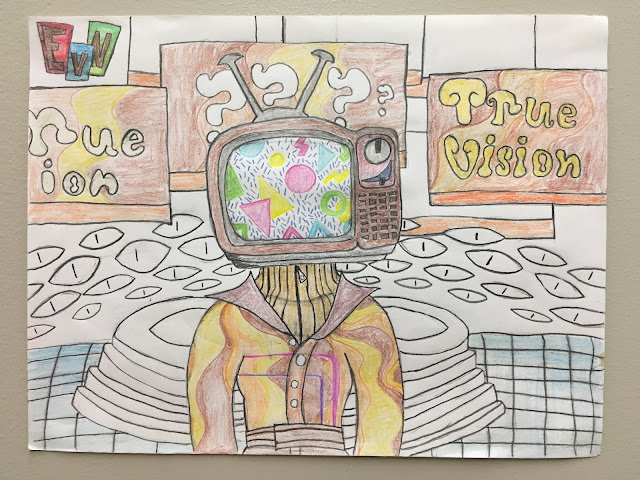 “Gem dynamite! There you are, ya snickering pal!”

“You seem to be trusted from your creative mind. I’ve never seen you enter this, since civil war 2! Ha ha...”

“Guess you and I aren't the only ones who have been in this F-[Bleep] small talk, since a….fatal incident….I don't want to tell you, nor wishing for a few criminals...”

“These people haven’t realized what ideas I've been analyzing their actions, due to how my studio watches them as a lie detector without any wires or pulses. But I've been into internet riot with idiotic people.

“Bloggers, Fans, Journalists, Everyone...EVERYO-O-O-ONE were playing as this talk show was just a..Joke!?....I spend my time observing this foul , as my position as an observer…They only think I was making false accusations and fake rumors!?.... AGH!...”

[Sound of breaking object (clearly hearing something fragile) from his frustration, before he remained calm.]

“When I began observing around the world, I've discovered a few strange individuals that seemed...odd. Each individual was contained with some all-known-energy, I think have to be called….let see... Aura of Naviacters. I couldn't figure out who was the one that kept their powers, because they only activated when they appeared in different times or locations.

[He put the POV camera inside the drawers, while still filming some voices. Camera can record shows, performances, commercials, and other information gained. However, Envisano controlled his cameras and electronics through his wired strings, like how he knew everything from his belongings when he wanted to record his datas and information.]

“Heee Heee….Guess you put on your little showbiz, Envisiano. I've managed to get past your mere defense system, as you weren't able to defend themselves. Why don't you tell me where those members are, so you will be spared..

“I won't let you get any of those members. They will be knowing everything that you won't be able to capture."

“Face it, Envisiano. You won't be able to gain any fans or anyone, if you never existed from this studio or your Research."

“You might take me down, but I will send that information to those Naviacters…”

“Oh? Let's see if you will be seeking your worthless chances in any possibility of failing from shame…”

“I'm not going to have you capture those people!”

[Gunshots, then collapsed to the ground...Since one of them was down, the camera started to flicker from losing contact with something. Who shot first? Who are the Naviacters? You'll find out soon…....]

Definition - Characters who created for discovering new locations, worlds, and sacred energy. They were chosen by the author using how they were given behind the story or knowing the hidden purpose. Characters are contained with balancing and managed the other world called “Anovion”.

Posted by Professor Nordell at 8:19 AM 2 comments:

As long as the work connected to contemporary photojournalism issues, students in COM2460 History of Photojournalism had complete choice of format and topic for creating their Midterm Project blog posts.

"I was delighted with the wide variety of formats students chose to creatively present their deep insights about photojournalism," said Professor Nordell.  "My goal was to motivate students with an assignment that allowed them to choose topics of personal interest and to present research in creative formats that showcased their individual strengths, talents and skills.  To say I was delighted with the submissions would be an understatement!"

In the following video, Visual and Digital Arts major Trevor Catlin explains how photojournalistic images can both help and hurt the cause of racial justice.

Posted by Professor Nordell at 5:27 PM No comments:

Last year Kelly Shea earned an honorable mention in the Boston Press Photographers Association (BPPA) student contest for this image captured during her internship with the Springfield Thunderbirds:

As a perk of placing in the competition, Kelly was asked to complete a three day takeover of the BPPA Instagram account.

About the experience Kelly wrote:

Being able to share my work and what it means to me on the Boston Press Photographers' Association Instagram was such an incredible experience. It really allowed me to get my work out there for people to see and to explain why I have a passion for creating photos. I think sports photography seems like it is the exact opposite of an art form so it was such a unique experience to be able to provide insight on the artistic techniques behind it.

You are invited to view Kelly's outstanding imagery and insightful commentary:

Posted by Professor Nordell at 2:48 PM No comments:

To learn more about Communication and the Arts at American International College in Springfield, MA, please contact: